Four days ago we remembered and honored the men and women who lost their lives in a callous and evil terrorist attack on September 11, 2001. One of the mantras of the day was never forget. Why do we remember such sorrowful moments? Because it is part of our history, the events of that day while tragic will forever play a role in who we are today. But it is also so we remember the past so that history does not repeat its mistakes. Fifty three years ago today another horrific terrorist attack shook the very foundation of this nation when on the morning of September 15, 1963 an explosion ripped through the 16th Street Baptist Church in Birmingham, Alabama. Four little girls, Addie Mae Collins (age 14), Carol Denise McNair (age 11), Carole Robertson (age 14), and Cynthia Wesley (age 14), were killed in the attack. Like 9/11 we must never forget our four little girls taken from us, simply because of the color of the skin, before they had a chance to live their lives. While it is true in the subsequent 53 years since that tragic Sunday we have as a nation made many strides, so much so that 45 years after Governor George Wallace who just one week before the bombing had stoked the fire of racisms and hatred when he said in a New York Times interview, he believed Alabama needed a “few first-class funerals” to stop racial integration we elected our nation’s first African American President. But there can be no denying we have a long road still ahead. It was only little over a year ago that Dylann Roof walked into the Emanuel African Methodist Episcopal Church in downtown Charleston, South Carolina and killed 9 people. His motivation? His support of racial segregation in the United States and his intended to start a civil war. Today the NYT released a poll that showed that Donald Trump was in a virtual tie with Hilary Clinton. This is a candidate who has run the most racially divisive presidential campaign in recent history. Whose campaign rallies routinely have supporters who spew racial expletives while wrapping themselves in the American flag. Yes we’ve come along way since that Sunday in 1963 but we still have a long way to go and that’s why we must never forget September 15, 1963 and our four little girls. 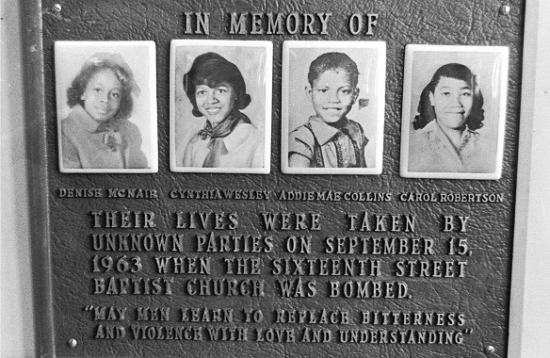