In many of the open America protest it is not unusual to see signs saying or paraphrasing the familiar refrain:

“Give  me liberty or give me death”

But what many in this country have forgotten is liberty is not something granted to us at birth. Nor is it something that is maintained without a willingness to acquire the knowledge required to see the true character of its leaders and to use that knowledge to hold them to a standard of accountability that is high, if not higher than they would hold themselves.

It is true that even when the people have a desire to inform and educate themselves on the issues that impact their daily lives, an individual of poor character thrust into a position of leadership who lacks integrity and accountability and whose vision is only the advancement of their own selfish agenda can through lies and misinformation blind the masses to the truth and in the process withhold the very liberty they seek to maintain

Unfortunately America today has allowed the  polarization of our country along political lines to supersede the thirst for knowledge. It has become all too easy for many of America’s so called “leaders” to manipulate the masses. To have them bend to their will wrongly believing that these leaders act in their best interest.

The open America protest is one such example. Through a campaign of misinformation and lies leadership at the highest levels has convinced them that the very measures implemented to protect them, is in fact an infringement on their liberty. They use that belief to rally around the very leaders who perpetrate the misinformation to advance their own economic and political agendas.

The dangers of not acquiring the knowledge required to identify the character of one’s leaders is not a new concept. John Adams warned us of it in 1765 when he said;

liberty cannot be preserved without a general knowledge among the people, who have a right, from the frame of nature, to knowledge, as their great Creator, who does nothing in van, has given them understanding and a desire to know; but besides this, they have a right, an indisputable, unalienable, indefeasible, divine right to the most dreaded and envied kind of knowledge, I mean, of the characters and conduct of their rulers.

We should heed his words for it would be foolhardy to believe the concept of America is forever. Lest we forget that the history of world shows our country is but a baby. One that will never get the chance to fully mature unless we cast aside our differences, stop allowing the few to manipulate the many and come to value knowledge needed to educate ourselves on those would be leaders of questionable character.

If you live your life to the fullest you will make some choices that seem like the right thing to do at the time, choices that ultimately wind up setting you back. With each setback will come those who will be quick to point out where you have have failed. But what they don’t know is that their finger pointing could never define you as a failure. Not because of arrogance or ego but because while you may have stumbled your belief in yourself gives you the strength to stand back up and wipe the dust from your hands and try again.  Because you understand that your choice while unsuccessful was but a building block on which your future success will be built and when you arrive at that success you will be a better person for having fell and looking adversity in the eye only to come out standing proud and tall.

They come in all guises politicians, businessmen, celebrities, and yes even religious leaders. They say they care about you, that they want to bring healing to the masses. But in reality all they are looking too do is to deceive and separate. They do it to expand their own power and their own wealth. They do it at the expense of the same people they claim to care about and in these difficult times it is becoming increasingly easy for them to achieve their goals. Blessed with a silver tongue they prey on fears. They repeat something as fact over and over again without any collaborating evidence and to those who are struggling, grasping at straws for anything to hold on to it soon becomes fact. They use the fears of those who feel their voice has never been or is no longer being heard. They prey on this not to help bring the masses together, not to help uplift society but rather to increase their own power.

Fortunately history has shown us time and time again that their success will be fleeting. They may garner fame and accumulate wealth in the short-term but as the bible verse says their empire is built not on the rock but on sand and when the rains fall and the winds blow their empire will be swallowed up by that same sand on which it was built. 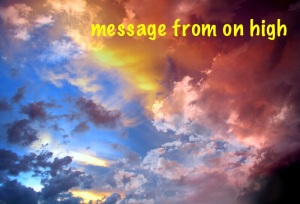 There has been some confusion of late so I just wanted to check in to state what I thought with the intelligence I have blessed you with should be obvious but apparently is not.

If you would see a child, one of my most vulnerable, go to sleep hungry or without a roof over their head simply because they were born into poverty or on the wrong side of an imaginary line you have drawn in the earth you can not say you are one of my children.

If you would think to call yourself superior to another one simply because of the color of your skin, ethnic background, religious group or sexual orientation you can not say you are one of my children.

If you would protect the wealth of those with an abundance at the expense of providing the bare necessities to those without you can not say you are one of my children.

If you would look to harm or worst kill another using my name as your justification you can not say you are one of my children.

For it is only in the heart of my children that the concept of unconditional love and compassion resides.

I hope that has cleared it up you. You may carry on.

“We believe the additional year of maturity would be meaningful. And increasingly, I’ve been told by many NBA coaches that one of the issues with the younger guys coming into the league is they’ve never had an opportunity to lead. By having come directly out of their first year of college, those are the moments in their lives where…they were put in positions as upper classmen, where they first learned how to lead teammates.”
– NBA Commissioner Adam Silver on raising the NBA minimum age

So what you’re saying Mr. Silver is that by staying an extra year on a college campus these young men will be afforded the opportunity to remain in a nurturing environment which will allow them to grow mentally, build strong characters and facilitate their growth into leaders. Well I can’t argue with that it sounds great except for this:

You see what Mr. Silver really wanted to say was this.

We believe that additional year of exposure at the college level would greatly improve the marketability of players eligible for the NBA draft which in turn will allow us to increase our revenue stream. After all the NBA is a business just like the NFL and every other sports league and at the end of the day our bottom line is why we do what we do.

The concept that the mere act of going to college will ensure young male athletes will mature mentally, build strong characters, take responsibility for their own actions and become the leaders of tomorrow is no truer than believing that being elected to congress would accomplish those same things. Sadly we have seen in both cases that’s not the case.

Going to college can and has played a critical role in the development of many young men. It provides them with an environment where they are able to develop their identity, and internalize a personal set of beliefs and values absent from the external influences of their family and childhood community. However in most cases, there will always be those who overcome, when this occurs in a positive fashion there is more at play than just simply the act of stepping onto a college campus. Rather it is the existence of a strong and healthy foundation established from early childhood that is in place. One that serves as a roadmap for young adults as they mature, adopt their own belief systems and increasingly begin to accept responsibility for their own actions.

In society it easy for to look at those who do wrong and debate what form of punishment best suits their crime. But what is difficult is to look inward and find the root causes for the issues at hand and until we do that we will never advance as a society. What is clear is that as a society it is imperative that we endeavor to lay the proper foundation for our young men to grow and build on. A large part of this is in teaching our young men how to respect women from the moment they can walk through both our words and our actions. The challenges to doing just that are many in today’s world. The number of young men being raised by single mothers is higher today than it has ever been and while many of them are doing a wonderful job it does not negate the importance for young men to have positive male role models to look to. Pop culture and sport stars have long since abdicated that responsibility, not that they ever should have had it, which means that the responsibility falls on the men in the community to model proper behavior and respect toward women in their community at all times, to mentor young men on how to communicate their feelings without violence or threats and to be involved in their children’s lives, and not just through court ordered child support payments, whether they are still involved with the child’s mother or not. An old African proverb popularized by a Hilary Clinton book in the 90s tell us that it “It takes a village to raise a child” and never has that been more true than today with so many young men being raised without positive male influences in their lives and the constant sexual objectification of women they are overwhelmed with on television, social media and everyday life. The choice is ours we can either start to lay the foundation for the next generation of young men or watch them continue down a path we know leads to their ultimate destruction.